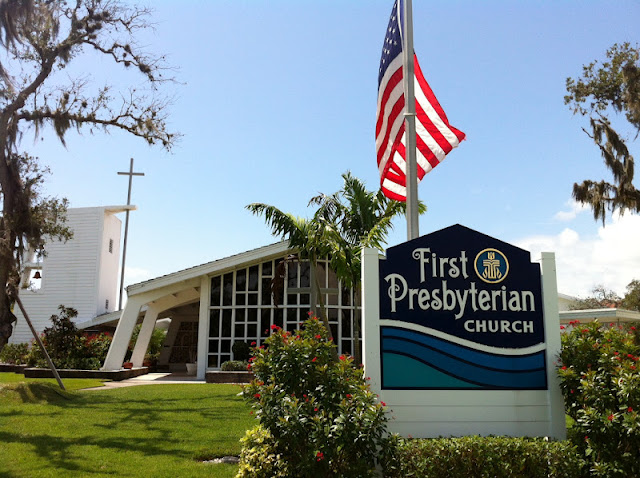 Today, Central Florida Presbytery held its September Meeting at First Presbyterian Church of Vero Beach.  I took these photos just after our noontime meal.  As you can see, the weather was gorgeous.  The photos are of the sanctuary, which won a national architectural award when it was built in the 1960s.  It has that mid century modern look that we associate with the "Mad Men" era or maybe even just a hint of George Jeston? I find the architecture to be very appealing.  That is appropriate, since the people are very appealing as well.  They all made us feel so very welcome and were wonderful hosts.

There were many great moments in the meeting--indeed, as one of the people who sat with us at lunch observed, there seems to be a new, more pleasant spirit about our quarterly meetings than we have had in quite a long time.  Those around the table agreed as to the reason, which had to do with the meetings no longer been disrupted by a few intensely discouraging voices, pastors and elders from congregations who felt it their duty to be heard on any matter, always in the negative, who, for many years, held the Presbytery meetings hostage.  As they are no longer among us, by their choice, it was as if a holy calm had descended over the entire Presbytery.

And a holy joy as well.

We found that the introduction of and examination of new candidates and new pastors to be an enjoyable experience, and several persons commented along those lines as these parts of the agenda were concluded.

The photo above shows the American flag which was at half staff in memory of the victims of September 11, 2001, eleven years ago, today, whom we also remembered in our prayers. 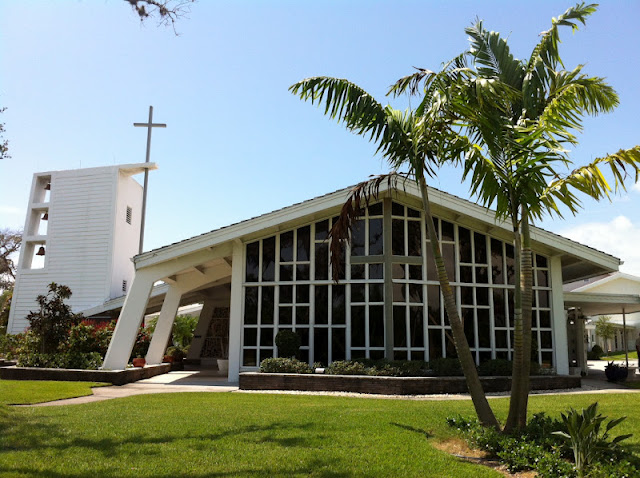 Among the many good things that occurred today, we installed Dr. Dan Williams as our new Transitional Executive Presbyter and Stated Clerk.  We had a report from those who were commissioners to General Assembly, we received three candidates for ministry, we welcomed several pastors into the presbytery and honored several others as they marked their retirement.  There was an election of also, in which I was elected to serve as the Moderator of the Presbytery in 2013. 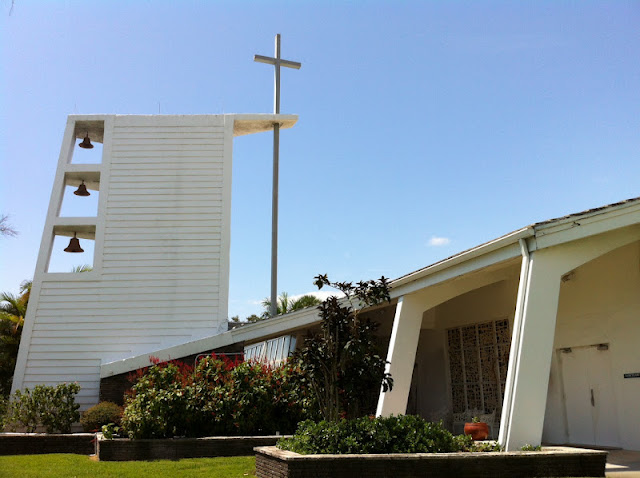 Above you see the bell tower which looks very much like the tail fin of a classic 1960s Lincoln Continental.  (Picture the red tail lights in the three niches where the bells are).  I probably should have photographed the wonderful new multipurpose building at FPC Vero Beach, where we enjoyed lunch and where we shared in the dedication of the new John Calvin Window, in honor of the former John Calvin Presbyterian Church in Orlando, where FPC Vero Beach's pastor, Dr. Tim's father, served for many years.  But we were all enjoying the lunch and the conversation that went with it that I did not get a chance to do that.  Below are more detail photos of the Sanctuary... 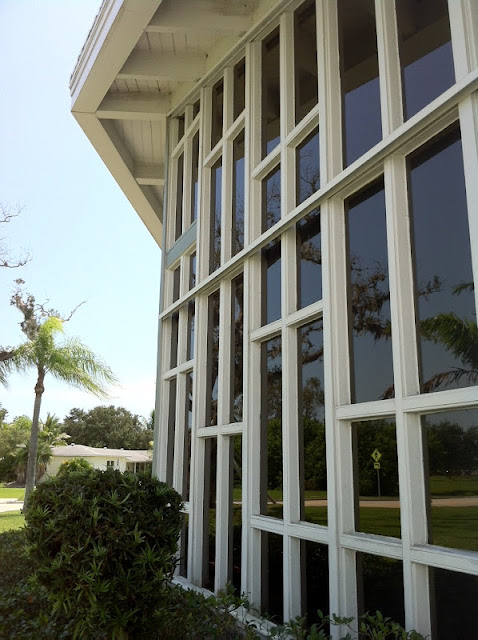 The Presbytery meeting included several fine impromptu moments from colleagues in ministry who I admire.  Dr. Jeffrey got up after having heard the examinations of the three new candidates for ministry and made a very thoughtful observation about the high calibre of pastors-to-be we are seeing come before us.  Before that, Dr. Tim, who is the pastor of FPC Vero Beach, gave them a charge reminding them to love their people, emulating Christ.  It was not long but it was a profoundly moving charge.  What a blessing it is to share in ministry with such outstanding pastors in our Presbytery.  And perhaps the most moving moment was when our new Central Florida Presbytery leader Dr. Dan thanked the Presbytery for its kind expressions of sympathy and love upon the death of his mother, which took place in Pennsylvania, literally as he was starting his work here in Florida.  "You have a wonderful Presbytery," he told us from the heart.  Yes, we do. 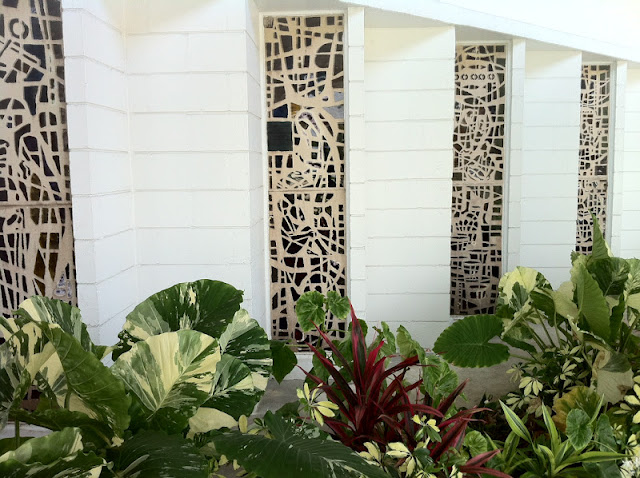 I never feel as if I have been to a Presbytery meeting until I have seen two of my elder friends from other congregations.  One is Emily, who is a member of St. Marks in Altamonte Springs, which is the nearest church to ours.  I hope all is well and suppose that she was not keen on the long drive to and from Vero.  I DID get to see my other dear friend Connie who is an active member of FPC Vero Beach and who in fact sings in the choir so we had some smile-back-and-forth time during worship.  Connie was a commissioner to the General Assembly in Richmond in 2004 as was I.  I must say that the group of commissioners from CF Presbytery were what made that event a plus...  Other aspects of it were not very pleasant including the part of Richmond in which we met.  I am not an easily frightened person, but even at high noon, the area around the convention center was a scary place.  Maybe things have improved since then; let us hope so. But I digress as I often do, and would prefer to  say that I was glad that Connie is still speaking to me, since I did not give her advance word that I was going to be nominated for Moderator in 2013.  I did not mention it to anyone, waiting for the Nominating Committee report to appear, which I think is good form. 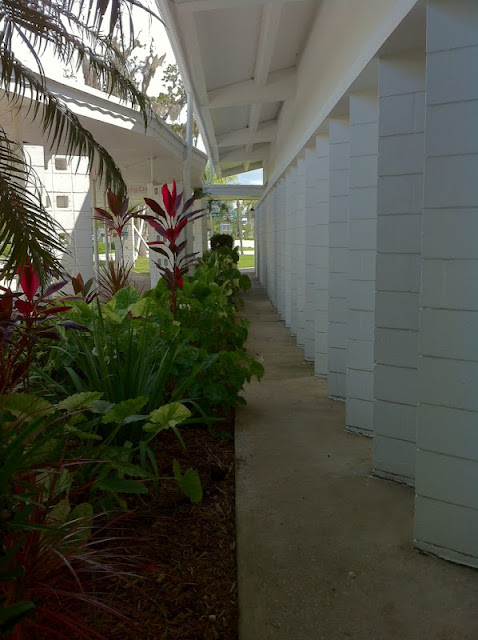 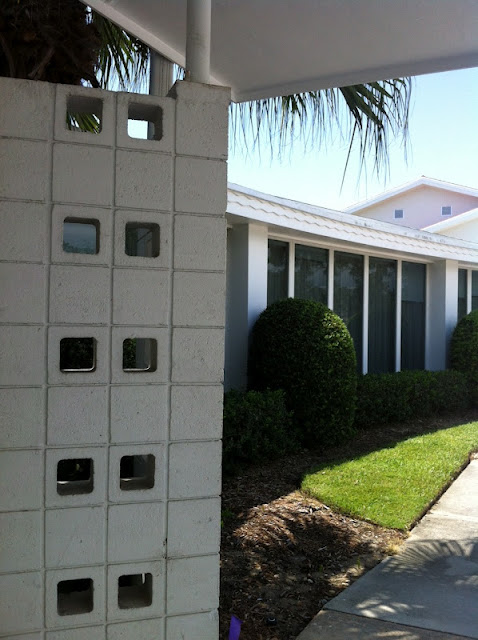 Above and below you can see just how decorative pierced concrete blocks can be, when used thoughtfully and artfully. 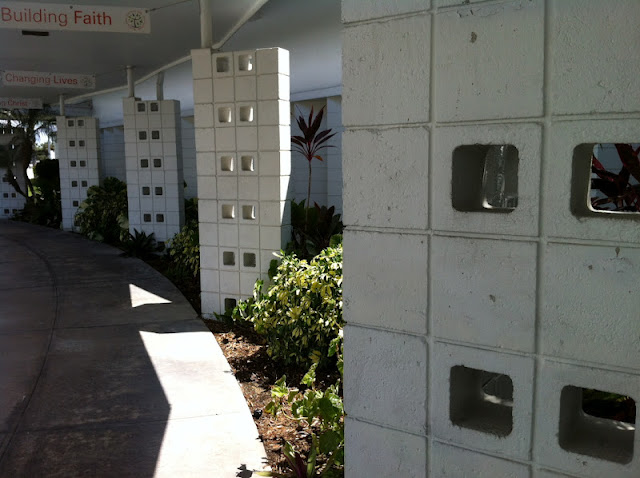 If you live in Vero Beach and do not have a church home, you would find this congregation to be a most welcoming and friendly one.  Why not worship there and get to know their pastor Dr Tim and the rest of the church members and staff.  The church is located at: 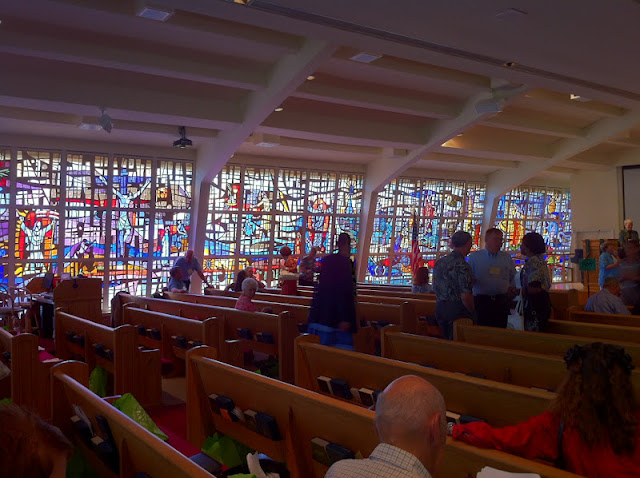