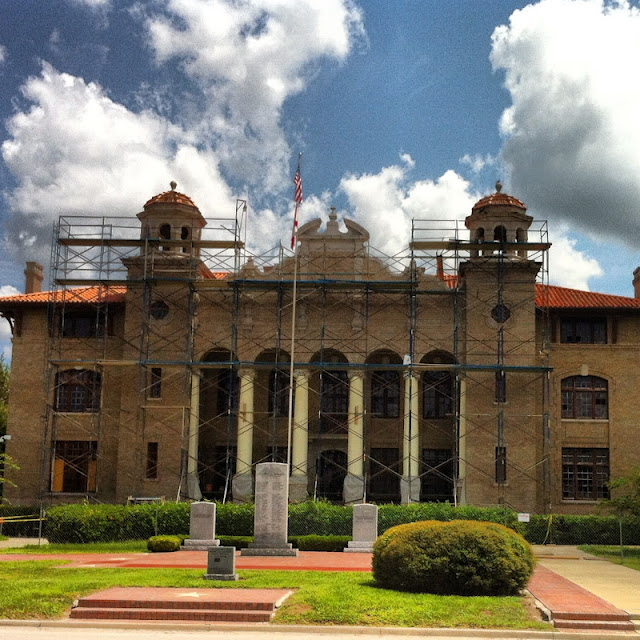 I believe this is the Sumter County Court House.  It stands in the heart of Bushnell, Florida, and you can see the twin towers from some distance away.

That is how I happened upon it this weekend.  I thought, "There is a nice example of Florida Mediterranean Revival Architecture," and so, turned off of my planned route in order to get a closer look. 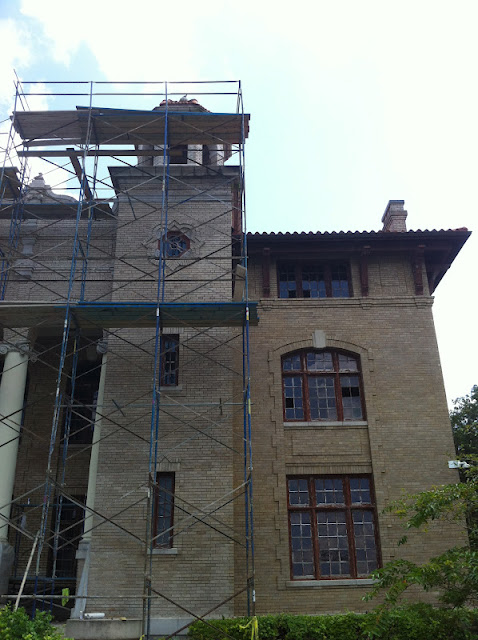 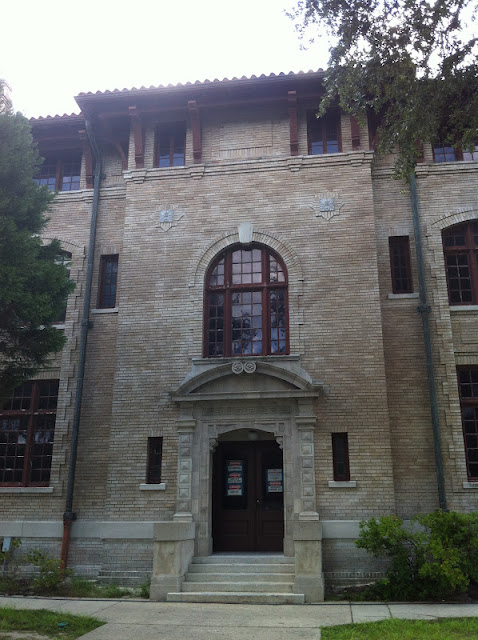 The closer I got, the more I could see that the building's facade is swathed in scaffolding; hopefully, this means historic preservation is underway.  There was no one about to ask, since it was a holiday, and the only "life" around the building was wildlife--pigeons who were roosting on and in the tower campaniles, cooing down at the occasional human passer by.

I have done a bit of searching and was disappointed to find out that this building was not designed by one of the leading Orlando architects of the day.  Nope, the architect was from our sister state to the north, Georgia.

From what I have read, there was a real battle over where the county seat would be, and Wildwood lost to Bushnell in a close vote.  Then, the process of constructing a building to house Sumter County Government began.  William A. Edwards, an Atlanta architect who also designed campus buildings for Florida State University and the University of Florida, was employed to design the plans for the Bushnell courthouse.

According to UF researchers, William Augustus Edwards (1866-1939), a native of Darlington, S.C., was one of the primary architects of educational buildings in the Southeastern U. S. in the early 20th century.  Edwards earned a degree  in mechanical engineering from South Carolina College, Columbia, in 1889.  In 1895 he and Charles Coker Wilson, also of Darlington County, set up on office in Columbia after working in Virginia.  Wilson and Edwards prospered in Columbia.

In 1901, Edwards teamed with Frank C. Walter. Edwards and Walter's projects through 1908 included many buildings associated with South Carolina's statewide program of public school construction.  In 1908, Edwards and Walter moved to Atlanta where they were briefly associated with an architect named Parnham.  This firm last through 1911, when Walter left to pursue his own practice.  In 1915, Edwards established a partnership with William J. Sayward, and in 1919 Joseph Leitner became associated with the firm.  Edwards continued to work successfully from his office in Atlanta until his death in 1939. Distinguished academic buildings designed by William A. Edwards include works at these institutions: During 1903-1915 Edwards design all S.C. courthouses.   Most are still standing.  Among them:  Darlington County, Kershaw County, Sumter County, Abbeville County, Lee County, Dillon County, Calhoun County, York County, and Jasper County.

But back to Bushnell...

Acreage was purchased in Bushnell for an unknown amount, and the construction contract was awarded to J. F. Jenkins for $49,759.


The completion of the Sumter County Courthouse was a much awaited event. Local town people watched with anticipation as each brick was laid (this was before the day of TV or Internet; I understand watching the paint dry and the grass grow were also popular pastimes, back then). 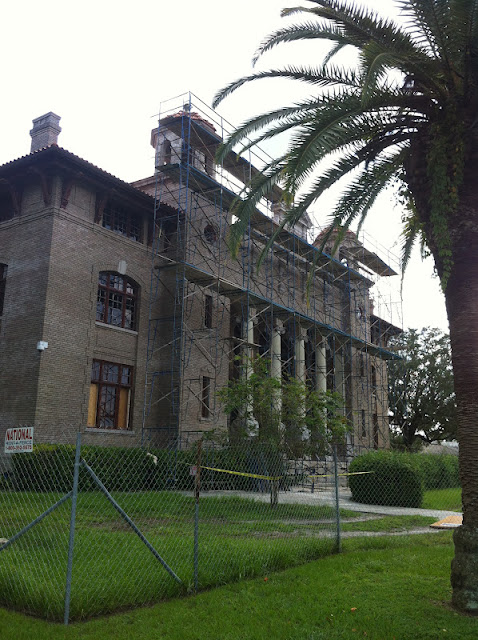 Construction began in 1912 and was completed in 1914 and the according to the Sumter County website, "The County Seat remains unchanged".

I wonder if the people in Wildwood mind?
Posted by John A. Dalles at 2:20 PM