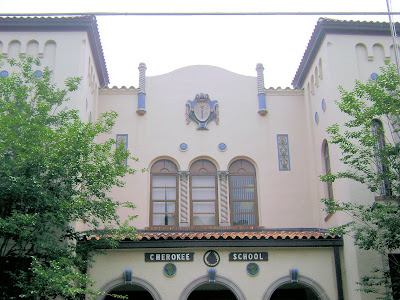 My Monday meandering took me to some side streets in Orlando, in order to photograph some splendid architecture from the 1920s. Among the most wonderfully whimsical is Cherokee Junior High School, with a style and grace that would befit a motion picture palace or a grand hotel. But it is home to eager learners and teachers day in and day out. The school is the brainchild of Howard M. Reynolds, who was among that dozen or so architects in Orlando in the 1920s who were working hard to create a distinctive Florida architecture. I think he more than achieved it, here, in this Mediterranean Revival building that is among Central Florida's architectural treasures. 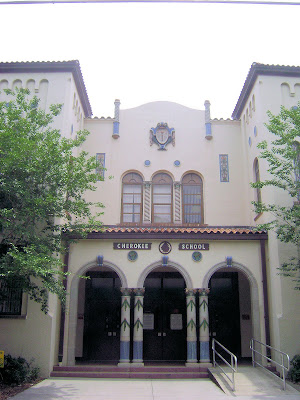 It would be fun to try to trace the historic antecedents of Mr. Reynolds' design. Certainly the arched entry with the terracotta embellishments owes something to Brunelleschi's Foundlings Hospital in Florence, right down to the della Robia coloration of the composite columns and capitals, festoons, keystones and swags. Andrea della Robbia (October 24, 1435 – August 4, 1525) was an Italian Renaissance sculptor, especially in ceramics, from Florence, noted for his terra-cotta roundels and for their bright colors, especially blue. He was much admired in the late 'Teens and 'Twenties (some of the Roseville art pottery of that era was also based on and named for della Robia's work). Put the word "dellarobbia" in your search engine for "images" and you will see what I mean.
Triple arched forms were employed by most of Orlando's leading architects when creating work evocative of sunny Spain or thereabouts, and Howard Reynolds uses them here to pleasing effect. The arched parapet has a central cartouche in which is a lighted lamp, as in the Statue of Liberty's hand. The lamp of enlightenment. The parapet is flanked by barrel tile shoulders and the protruding towers are graced by castellated arches and more "della Robia blue" roundels. 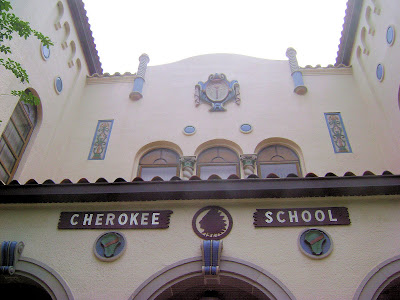 The school is hidden on a side street, a charming side street, but it needs the kind of breathing room that several of the other fine Orlando schools enjoy such as the Alamo-esque Marks Street Senior Center (it began as the Marks Street School, also by Howard Reynolds) and F. H. Trimble's Delaney School, now the Beardall Senior Center. Absent a lawn to set it off, you have to crane your neck and take time to look up, through the limbs of the mature trees, and linger, to enjoy the beauty and joyfulness of this Reynolds design. As you do, such details as the rectangular insets and the twisted Solomonic columns help to create the harmonious whole. Here are some close ups, for which the Cherokee School is ever-ready... 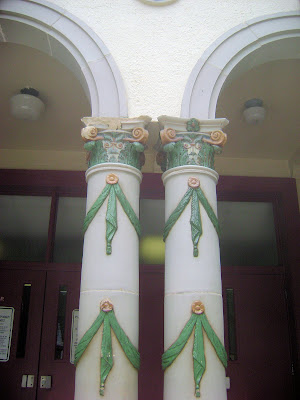 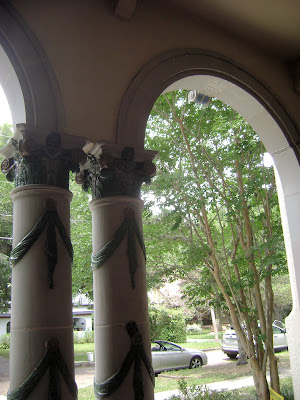 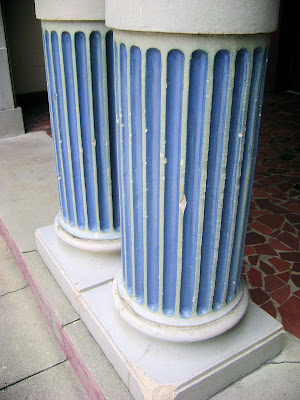 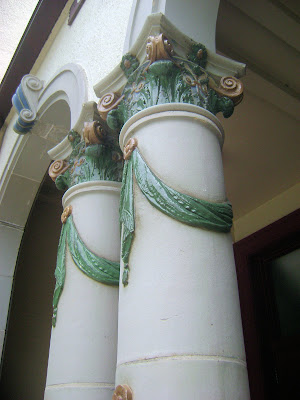 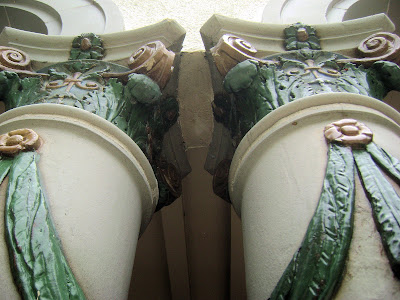 I'm not sure if you can see them, but the capitals of the columns have as their main design stylized owls, symbolic of wisdom, naturally. If you look at the photos above, and below, especially if you double-click on them to view them large, you will see the hooded eyes staring out from between the acanthus leaves. Now, if you doubt my interpretation of the owl face, read on... 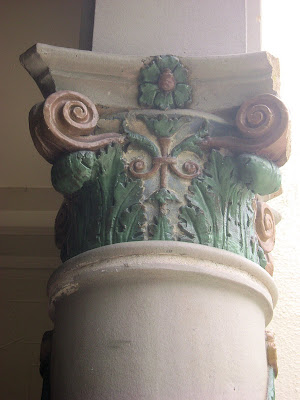 You will perhaps forgive the number of detail photos I have included here. I find the colors and forms very pleasing. Reynolds must have had fun working out all these designs. 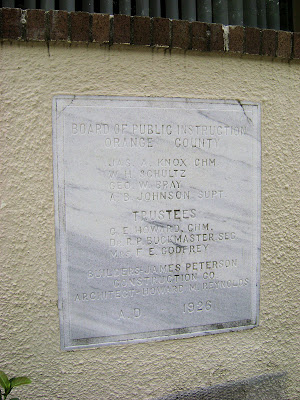 It is good that the schools in Orlando have plaques on them to identify who was behind the building of them, include the name of the architect and the date. Would that all buildings were signed by their architects, it would make the architectural historian's job so much simpler!

Between the large rows of windows, on the main facade, you can find the detail shown below. At the cornice, the round window, surrounded by della Robia wreathes and rosettes and the bundled fasces, an ancient symbol of authority...though thankfully, without the axe blade. Along the wall below, the elongated rectangular inset (with the wonderful zigzag detail that owes more to the Art Deco movement than to the Renaissance), another wreath, and below it, the three long twined ropes that are pure Prairie Style design. 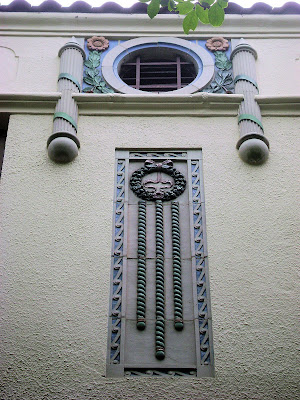 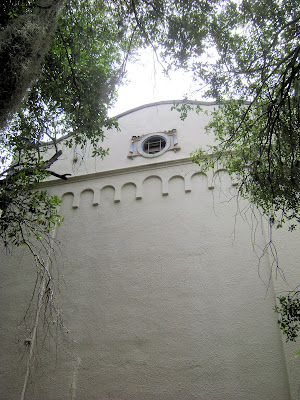 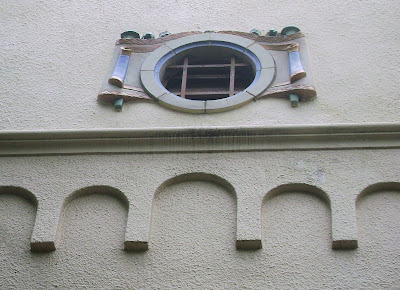 The patient observer will walk to the north, while facing the school, and at the north end, will find a small alley. Down that alley is a side tower with arched entry porch that you see, below: 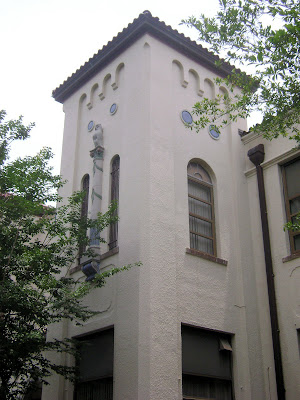 And yes, there on top of a column is an owl in all of its glory. Insightful, wise, protective. What fun! Harry Potter would love this school, even if it isn't Hogwarts. 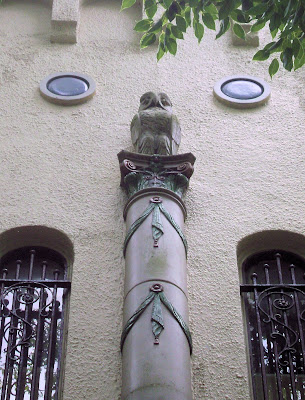 As with Isabel Roberts, Ida Annah Ryan and Frederick H. Trimble, I have been researching Howard M. Reynolds. Much of what I have learned has made its way into the wikipedia article about him and is in this biographical sketch:

Among Reynolds' best know works are a number of educational buildings still in use as schools or community centers in Central Florida. Many of Reynolds' suave, stylish buildings have been designated as Orlando Historic Landmarks.

Reynolds' was among a small but active group of ten architectural firms listed in the Orlando phone directory in 1926, the others including: Frank L. Bodine, Fred E. Field, David Hyer, Murry S. King, George E. Krug, Ryan and Roberts (Ida Annah Ryan and Isabel Roberts) and Percy P. Turner. This group of architects felt it important to create a distinctive regional architecture, an effort which they described in the Florida journal The Florida Circle in 1924 as follows:

"Just as architects of old created styles to harmonize with their environment, so have the architects of Florida been creating, from native motifs, a style that is carefully adapted to the climatic conditions and surroundings of the state. This style has an individuality all its own and should have a fitting name to express its origins . . . The Florida Association of Architects will give a prize of $25.00 for the name selected." [1]

This list of works by Howard M. Reynolds is incomplete; you can help by expanding it, by letting me know of others of his works. Simply email me via the church website you see on the right sidebar of this blog.