It’s Not a Sprint Its a Marathon

They will take the problem on, and solve it.

I suppose that I have never heard a sermon on the strength of Jesus.  I do not know why.  He is the strongest man who ever lived.
-- Not the Charles Alas kind of strength (If you don’t recognize that reference look it up later).
-       Not the kind of strength that come from power lifting…
-       Wait maybe I have that wrong.
-       He has the power to lift you to where you need to be.
-       So, talk about power lifting!  . Jesus is your man.
And he will knock down whatever is trying to bear you down, all the while lifting you up again.
Setting you on in a place that is safe and secure and solid.
Trust Jesus.
He has done it again and again.  And he is ready to do that for you.
This is the wishful thinking of an optimist, someone will say.
No.  this is the proclamation of the Good News of Jesus Christ.  Which it not a Pollyanna approach to life.  It is a God of the ages approach to life.
Who do you always want on your side?
The one who gets you to the finish line as a winner, a victor,
First, second, third or last.
The one who gets you to the finish line as a winner, a victor,
My friend Sean is a marathon runner.  I have seen him out running.  In Fact, I used to see him every day along Wekiva Springs Road, the main road between my home and my church., in Florida I would call out, “Yo, Sean!” and he would smile and wave and keep on running.
I have seen him out running.
It isn’t pretty.
Sean sweats a lot, and he wears t shirts that get drenched from the long runs he takes.
And usually, Sean’s hair is matted.
And he has a runner’s gait that is not like a dancer’s.
In fact, I am not sure how he does it.
He is what we would call middle age.
But he has run the Boston Marathon a number of times and he is fast.  I am glad Sean is fast.  Because he finished in so much time back in April 15, 2013, that his mother and he were miles away having lunch when the bombs went off – at the finish line on Boylston Street …

And in the exact spot where his mother had been standing to watch Sean run past, during the race.

Sean is also a dedicated youth leader in his church and has been on more mission trips than anyone else in the congregation.  I believe the number is thirty – as a youth, and as an adult leader.
I asked him, once, if he had to sum up what makes for completing a successful marathon, he said:
“Practice and Persistence.”
I suspect you know a marathon runner, who would say something similar, if you asked him or her.
And I suspect you know any number of followers of Jesus Christ who would say something similar.
/////
Jesus would also tell us that sometimes you have to save people who don’t want to be saved.
We get that message all through scripture and especially in the beloved words of Psalm 23…
He is the Good shepherd and people are the sheep of his pasture who ought to be along still waters and sanding in green pastors.  It is a strange thing that they wander off and get into trouble.
They think they can do it on their own.
They think that they know better than God knows.
They are certain that everyone’s viewpoint matters but not as much as their own.
They doubt that God can do much for them.
Oh, there are any number of reasons they would give.
But would a person trapped in a burning house turn away the firefighter who came through the flames in order to get them out safely. No.
……….
A ship stopped, mid ocean, at about ten after nine in the evening.  The husband and wife, who were in their stateroom, noticed that the ship had stopped moving.
“Something is wrong.” He said.
“What do you think it is?”
“I think someone fell overboard.”
“Oh no really?” She said, in quiet disbelief.
But a moment later, the ship began moving again, and on the TV monitor screen in the room, that indicated the ship’s progress, it was clear that the ship was turning around.
In a few moments it stopped again. And then gigantic spotlights were trained back and forth, on the dark, deep, open ocean.
As that was going on, a launch was lowered into the water.
And about half an hour after that, the ship started up again, and turned to its original course, and was underway.
In that short period of time, the crew had rescued a woman who had fallen into the water, from the 13th deck.
She was tremendously lucky, that she hadn’t fallen on to some other portions of the ship on her way down.
She was even luckier that people on the 13th deck had seen her fall, and had thrown a life preserver, that lit up the moment it hit the water.
She was even more lucky that the captain and crew were quick to act.
And luckiest of all - that she survived her ordeal.
Now…
Would a person who is all alone in the water, in the dark, mid ocean, say,” Oh no I don’t need that life preserver.”
…
But it is strange, isn’t it, that people who are perishing, resist what Jesus can do for them.
I would urge them to reconsider.
We would all urge them to take the help that is extended to them.
We would say – let Jesus do what he came to do.
Let him keep you safe.
If you have a chance to save someone who doesn’t think they need it, do that.
And remember, it may take a while.
But this is a marathon, not a sprint.
/////
There is an old hymn, not much sung anymore.  No matter, it expresses what we are talking about.  What we are experiencing in these unusual times.  (Far off I see the goal).
1 Far off I see the goal—-O Savior, guide me;
I feel my strength is small-—be thou beside me;
with vision ever clear, with love that conquers fear,
And grace to persevere, O Lord, provide me.
[Robert R. Roberts, 1925]
Amen. 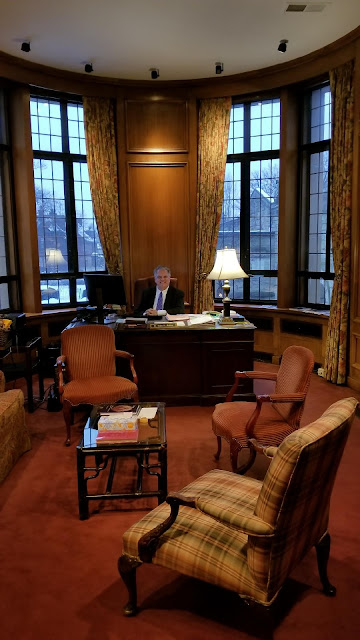 This is an original sermon by The Rev. D. John A. Dalles, Interim Senior Minister and Head of Staff of Shadyside Presbyterian Church, Pittsburgh, PA .  It was delivered on the date indicated in the text. You are encouraged to read it and reflect upon it.  Please keep in mind that the sermon is Copyright © 2020 John A. Dalles.  Permission from the author is required to reproduce it in any fashion.
Posted by John A. Dalles at 6:58 PM

Labels: Dr. John Dalles, It's not a sprint its a marathon, The Rev.Dr. John A. Dalles; Shadyside Presbyterian Church